Tulip Time is almost over!  The Muziek Parade (music parade) brings many festivities to a close this week.  School bands from all over Michigan will walk.  About 170 entries (4000 people) walk by on the longest parade route of Tulip Time.
This image is of my sister with my kiddos.  They love her kindness, and energy she shares with them.  She gives of her time, as a second 'mom' for them.   We also found that my little girl looks more like her than like me at times :)   My sister and daughter have the same costume.

Fun Fact : Dutch Costumes represent a province of the Netherlands.  My boys are sporting the Achterhoek boys costume from the province of Gelderland.  It is the 'rich boy' costume, with a fancy vest and silk red scarf.

My little girl wears the Isle of Marken costume, from the province of Noord Holland.   Her red and yellow split vest would indicate she is orphaned.  Her skirt is shorter, hinting that she probably was big into fishing, and walked into the water more often then those with longer skirts.

Their costumes are handmade, (by my mom) and many of the costumes cost upwards of $250.   Dutch Costumes have a very strict pattern and fabric options.  My mother has made us a costume every year that we couldn't fit into the previous years.   Girls often wear the men's costumes, since the majority of the men in the community don't fancy dressing up in them.  The costume worn by my little girl was likely worn by me at her age as well.  (although with 3 sisters, I'm not sure exactly which costumes I wore each year.)  Some people think we wear these all the time, but that's a myth.  These are special authentic costumes pulled out for just the weeks surrounding Tulip Time.  Although, wooden shoes are great for farm work and gardening, and will occasionally be used more of the year.

There are 12 provinces of the Netherlands, and the Tulip Time festival has costumes representing 8 of them. 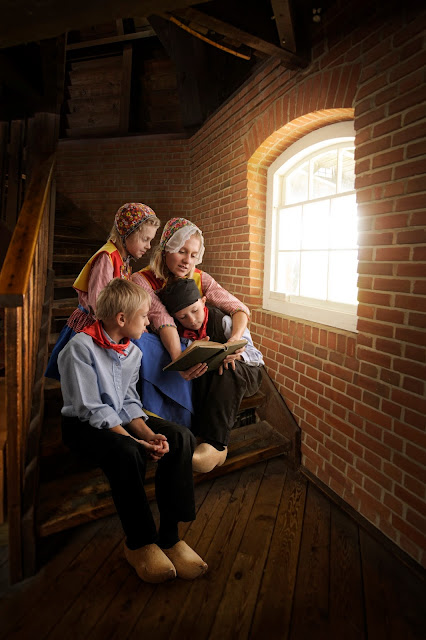